Remote sensing of the environment

Remote sensing of the environment

What is remote sensing?

Remote sensing involves using technology to explore the environment at a distance, gathering data about its composition and characteristics without actually making contact with the earth.

Whether it’s exploring distant planets or watching rocks or ground movements, remote sensing can reveal a lot about the area in question.

There are a number of remote sensing technologies in use for various applications including radar, lidar and imaging technologies. These technologies are deployed on satellites, drones, aircraft or even the ground to allow scientists to capture and analyse data without coming into contact with the area being sensed.

These technologies feed back important information to scientists who can use the data to make educated predictions about the likely characteristics of the area and track changes over time.

Remote sensing can be used to forecast landslides, study urban development and its impacts on the environment, map fires, track clouds and even has significant application in mining with systems used to map geographic patterns and provide information about mineral composition. 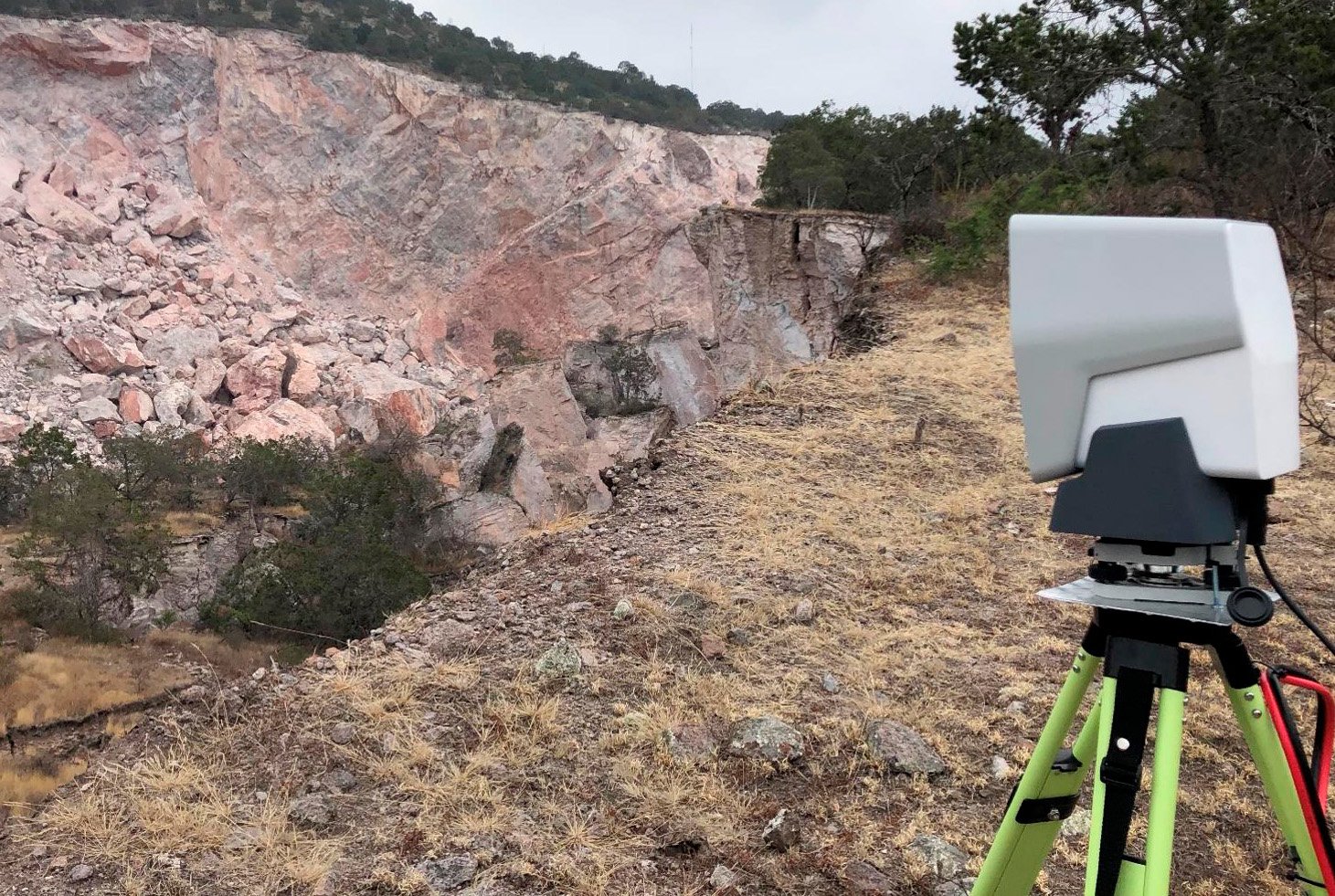 The use and benefits of remote sensing

Through using sophisticated imaging technology, scientists are able to remotely capture images of the earth’s surface that can highlight features not usually visible to the human eye.

Remote sensing can also capture large areas of land or ocean mass, enable access to remote or hazardous locations and some can operate in inclement weather.

This data can then be combined with other information like maps to enable geologists to make conclusions or predictions about any changes over time or potential future changes.

Remote sensing is also increasingly being used in mining. Slope stability systems using Radar and Lidar from the ground or from the air are now standard practice remote sensing technologies in mine sites globally. This data can forecast when a mine may experience a collapse.

Using remote sensing tools, geologists, geotechnical engineers and mining engineers do not need to make contact with the earth to investigate what the ground conditions are.

It can save time and money and be particularly useful in locating mineral deposits in hard to reach areas. As many major mines around the world are maturing, new deposits have become challenging to find because many of the most obvious ones have already been discovered.

That’s where remote sensing can assist as it can evaluate large areas to detect minerals in geological formations and in sediments without the time and expense of work on the ground.

Numerous deposits of ore around the world including gold, copper, uranium, magnetite and iron oxide copper-gold have been successfully discovered using remote sensing technology and in Australia, airborne remote sensing surveys have been used to search for new diamond deposits.

Remote sensing can also be employed to map environmental pollution and monitor the area around a mine site to track sustainability initiatives and environmental management.

How does remote sensing work?

Remote sensing works by using either passive or active sensors. Passive sensors, such as photography, photogrammetry, infrared, thermal, multi-spectral or hyper-spectral imaging captures radiation emitted by the sun and reflected off the surface. This reflected energy is captured and processed to reveal insights.

While digital cameras take a limited amount of spectral data to create the image we see through our camera lens, also called a true colour image, there are some portions of the spectrum that are not visible to the human eye, but contain a lot of other useful information.

These can include the near infrared and thermal infrared bands of the electromagnetic spectrum.

Remote sensing uses a high powered camera to tap into these thousands of wavelengths of energy to produce images that can measure a variance in the area’s spectral absorbance.

These images estimate physical and chemical properties of an area that we can’t see with the naked eye through measuring variances in its spectral absorbance.

Active remote sensors emit their own energy, reflect it off the surface, and are captured by a receiver tuned to a specific matching frequency. Examples of active remote sensors are broadly LiDAR, Radar, structured light scanning, flash photography and active infrared.

LiDAR is Light Detection and Ranging, which involves measuring a reflected signal of coherent light (generally a laser beam) that is reflected off a remote surface to measure the distance of that point and its reflectivity, called intensity.

Radar uses much lower frequency or longer wavelength energy to determine absolute range, relative changes in range, 2D and 3D imaging and velocity as well as signal strength which is generally referred to as amplitude.

Data collected from remote sensing is analysed and interpreted using a variety of image processing and analysis techniques. An important feature in understanding and using the data captured through remote sensing is spatial resolution.

Spatial resolution is the size of the smallest feature that can be detected by a remote sensor or displayed in the image. It is defined in terms of each individual 2D pixel or 3D voxel meaning that a spatial resolution of 5cm means one pixel is equivalent to an area of 5cm x 5cm on the ground.

Scientists will use techniques like contouring, colour coding and enhancement and overlaying data like topographic maps or weather maps to further enhance an image to better display or highlight the image’s key features. Image processing can also be useful to remove and correct distortions from atmospheric radiation that may degrade the quality of the image, and therefore the data.

Remote sensing technology is either active or passive, active meaning the technology operates with its own source of emission or light and passive meaning it relies on reflected light from the sun.

Using sensing instruments, remote sensing change detection data can be produced to compare and analyse two or more images taken at different times in the same area to detect changes in features of the earth’s surface.

This can yield important information for example, remote sensing imagery can be produced and analysed over time to show deforestation, monitor crops or measure the moisture content of soil.

These multiple sources of imagery are called multitemporal remote sensing data, which are images from the same or multiple sensors collected in the same location at different times to help in change detection.

When combined with analysis software, or even Geographic Information System (GIS) software, remote sensing data and multitemporal data can be analysed and presented in a graph or map form to help identify spatial patterns and relationships.

Data that can be inputted into a GIS computer technology includes maps, aerial photographs, survey data and digital data collected from satellites. All of these types of information can then be scaled and overlaid on top of one another to form a single map, allowing for easier and more informed analysis.

As active remote sensing technology uses its own source of light (like a camera flash), it can be operated at any time of the day. In contrast, passive remote sensing, like satellites measuring forest cover, need sunlight to produce effective results.

The power of combining geoscience and remote sensing is to enable scientists to better understand the interaction between the Earth and its environment and human activities like development.

It uses data collected from remote sensing activities like satellite and radar technology and physical modelling to look at impacts on the oceans, forests and the aftermath of natural disasters.

The remote sensing of emissions such as methane also has potential in helping to tackle climate change. Methane emissions from oil and gas production contribute to concerns about climate change.

The ability to monitor methane emissions from oil and gas production from a remote sensing satellite in space has been discussed as a potential way to better monitor and understand unintended emissions and help to mitigate climate change.

Geobotica is a company that develops both active and passive remote sensing technologies for industry to generate high value measurements.

Geobotica has created remote sensing solutions for use across industries.

Geobotica is a customer-led research and development house based in Brisbane, Australia. We work with industry partners to develop world-leading sensors, software and AI solutions.

Learn more about innovation at